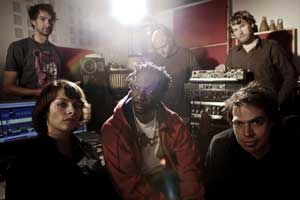 Junkyard Productions’ second album “Colour Me” is released in 2009. The album takes its impetus in the
dusty and organic sound, that also characterized the debut album “My Yard Is Junk Yard” (Murena Records
2006) but has a more hard-hitting sound, that reflects the development Junkyard Productions through innumerable
live appearances have undergone since the debut album. Moreover, the production and songwriting
have been perfected through the experience the band had remixing and co-writing with international artists.
The debut album “My Yard Is Junkyard” won immediate international recognition. The unique “Junkyard
Productions sound”led to co-writing with All Saints (UK) and remixing All Saints (UK), Mykal Rose (JAM)
and Enur feat Natasja (DK), among others. The singles “Sister Let Him Go” and “Grateful” received massive
airplay on DR P3 and the French Radio Nova, and has been licensed to numerous compilations in Europe
and the USA.

Junkyard Productions is inspired by olskool Jamaican dub and rock steady, club genres as dub-tech and
dub-step and a good portion of Dancehall and hip hop.
Junkyard Productions is an experienced and powerful live band. In 2007 they played in front of 6000 people
on Roskilde Festival’s Cosmopol stage (the biggest festival in Scandinavia). Junkyard Productions has
toured in Denmark, France, Germany and Switzerland, have been headlining “Nuit Zebré de Radio Nova”
live on Radio Nova (FR) and shared stage with legendary artists such as Horace Andy, Lee Scratch Perry,
Anthony B, Jimmy Cliff.

In front stands Ena, who is half French, and an experienced jazz and soul singer and MC-Pops Jabu, who
has lived in South Africa, Zimbabwe and London, before he settled in Denmark. They are accompanied by
Christian Skjødt (drums) Dennis O. Nielsen (bass), Anders Thykier (percussion) and the band’s founder
Rasmus Allin (melodica, samples, dub).